In which we get introduced to an Irish whisky, two new Scotches and one new edition of an oldie-but-goody Islay.

My brother in law and I have an interesting time, birthday-wise.

We’ve been doing seriously whisky-themed birthdays for about 15 years.

Celebrations involve a gathering at the celebrator’s residence, a gift of whisky is usually made and samples of the celebrator’s single malt stocks are tasted (refer to previous block about stocks being depleted as the result of family events).

The whisky gifts tend towards the odd, the new, the hard-to-come-by or the downright unusual.  It’s not a competitive thing: we just like to get something that we haven’t tried before or for a long time.

For our wives, wine is also served (Merlot in the winter, tending to Rose in the summer months), plus the occasional rum or gin-and-tonic (gentle on the tonic!)

For those of you who may be concerned, the celebrations also involve either a substantial lunch or a barbeque where all the participants contribute a dish to the meal.  The families all have at least one great cook (sometimes more than one) and there are many speciality dishes in the mix – you never go short of something to eat!

For my last birthday he gave me the latest Teeling Grain whisky, the one that got Best Grain in the Whisky 2018 awards.  A nice drop I have to say, and thoroughly deserving of the award!

For his birthday I found a sherry matured Bunnahabhain 12 year old that I hadn’t seen on shelves for a while and that he had just finished his bottle of.

He had been threatening me for some weeks with three new whiskies that he’d found somewhere that he was going to get to try.

Colour: 1.7, with a reddish tinge from the port casks. 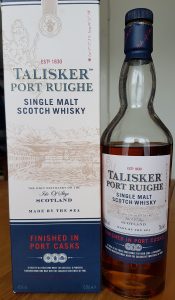 Palette: bacon, pepper, smooth, slightly sweet.  Did I mention the bacon?  Tannic at the end. 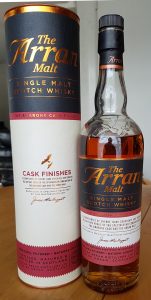 The Arran, The Amarone Cask Finish.  50% abv, non-coloured, non-chill filtered.  The blurb on the box notes that the whisky was initially matured in traditional oak cask, finished in Amarone wine casks.  (In case you’re asking, Amarone is n Italian red wine.  We know.  We looked it up!)

Palette: cherry parfait, pears, smooth, no tannin.  More cherries, followed by other cherries!  The taste lingers, along with the cherries.

That was his three, and quite imporessive they are.  But it was only afternoon tea time (we had started at midday), so we had to try: 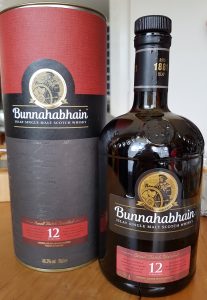 With luck, we will both have another birthday each next year.  I’m looking forward to that, although I’ll need to spend the next 12 months trying to find a suitable present.

Thanks to all who cooked (and ate) for the event. The food was damned fine, too!

This site uses Akismet to reduce spam. Learn how your comment data is processed.