Two and a half years can be a very long wait.  But when the wait is over the outcome will prove that it was all worthwhile.

Two and a half years ago I was fortunate enough to be part of a group that got to taste the new spirit from a New Zealand distillery. The universal group view was that waiting for marketable output from this major new distillery was going to be extremely worthwhile.

And so it has proved.

The western mountains of Central Otago on NZ’s South Island are some of the most picturesque in the world.

New Zealand’s newest producing distillery – Cardrona – is located on the highest alpine pass tourist route through the mountains.  Up until now the Cardrona area, some 40 kilometres from the southern tourist mecca of Queenstown, has been best known for winter sports,

I confidently predict that is about to change!

One of the non-skiing attractions of Cardrona is the quality of the local water source.  That has been one driving reason for building the distillery there.  The current Concerto grain used in production is imported from the UK, and the water is able to be added unfiltered to the mash.

The first release bottlings, appropriately entitled “Just Hatched”, were bottled two weeks ago from barrels casked at the beginning of December, 2015.

Two expressions have been released.  A bourbon cask and a first fill Oloroso cask.

Both releases have been in 375 ml bottles.  There are 474 bottles of the bourbon cask and 1,295 bottles of the sherry.  Both are presented in a very attractive, professionally designed wooden outline box, with a bespoke locking arrangement to keep it all securely together.

Caution: undiluted, this is in the top five strength whiskies I have ever tasted.

Nose: Taking the cork from the bottle, you are met by a strong, endearing aroma of honey.  From the glass, the first thought is of the sweetness.  There is alcohol and a distant memory of the glue boys used to put model aeroplane kits together when we were young.  Then it quickly turns to pears, green apples, and another memory of those lovely baked apples stuffed with dates, brown sugar and cinnamon that your mother used to cook.

Taste: Taking a large mouthful and holding it for ten seconds is not for the faint-hearted, unless you have medical insurance to put your head back on.  There is capital A alcohol, hot, full, a huge mouthful and the honey coming through.   The second – and more judicious – mouthful still has the big flavour, but now it has smoothed out to deliciousness.  At rest, there is gentle perfume and, most surprisingly, a hint of fresh mushrooms.

Finish: The finish is long, equally of flavour and heat with a comforting warm throat.

Comment:  The time in wood has had an effect.  The whisky is quite light in colour, and I didn’t find the vanilla notes that normally come from bourbon casks.  There is a New Zealand mythical “Southern Man” – tough, climbing a steep hill in snow carrying a sheep under each arm.  This, in its undiluted form, would be his whisky.  It is, in a word, magnificent!

But, as my brother-in-law observed, “This is definitely not a session whisky!”

I’ll be back for more. 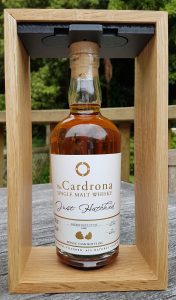 Nose: first nose from the bottle is a slight rubber bike tyre (sulphur).  That goes very quickly with exposure to air, and turns to honey.  From the glass, there is more honey, a sharpness, with golden syrup and rolled oats, and a gentle sugar sack.

Taste: There is grain and honey, rolled oats, leather polish, a slight bitterness that is typical of oloroso casks, and pepper on the tongue.  There is a beautiful roundness and fullness in the mouth, reminiscent of a low Christmas cake.

Finish: The finish is long on the flavour, and I wish it would stay even longer!

Comment: As with the bourbon cask expression, from the bottle this is a high abv whisky but very drinkable, even undiluted.  The dark oloroso engenders a much darker colour than its bourbon sister.  I am becoming quite a fan of sherried whiskies, and this is at the top of the very nicest I have tasted.  I’m just sad that the bottle isn’t bigger!

On a personal level, I prefer this whisky to the bourbon expression but I stress that is only my taste and nothing at all to do with the whiskies.

Overall comment: These whiskies may not be old enough to go school unaccompanied, but they are both more than capable of playing for the college First 15!

Or carrying a sheep up a hill.

Note: this article is unsponsored, but I would like to extend my thanks to staff at the Cardrona distillery for background information provided so willingly.