There a lot of tasting in this posting.

The whiskies come from a diverse range of distilleries – Speyside, Islay, the Isle of Arran, the Highlands and southern Central Otago.

There’s quite an age spread, too.

Of those that have an age statement – the youngest is 3 years old, the oldest 22.

Are you seated comfortably?  Then let us begin.

Pat likes finding – and subsequently tasting – some less-than-mainstream whiskies.  Which is fine with me, especially when he invites me to help with the tasting part.

His latest foray has been around the world of Tomatin.

Tomatin is a Speyside distillery, located a bit south of Inverness.  Apart from its massive levels of production, one of Tomatin’s claims to fame is that it was the first Scottish distillery to be owned by a Japanese company.

In the early 1970s Tomatin boasted 23 stills and a capacity of 12 million litres of whisky per year.  In 1985 the distillery went into liquidation, to be rescued the following year by the Takara Shuzo Corporation (now part of the Marubeni Group).

Tomatin remains a large distillery, although it is not particularly well known in its own right.  This is in part because, although the distillery currently annually produces around 5 million litres of whisky, 80% of the production goes to a variety of blended whiskies.

So here are three single malts, released under their own banner. 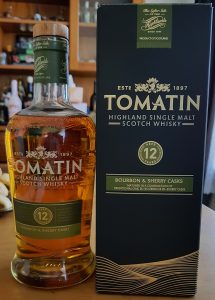 Nose: Apples and pip fruit.  Sweet and welcoming
Palette: Warm and sweet, with a slight but not unpleasant floral tinge of perfume
Finish: short-medium, oily.
Comment: A very nice and convivial dram that one can spend the evening consuming.

Nose: Dark & rich, with fruit, fruit cake, thistles and wet nappies.
Palette: The first taste gives a quick chilli hit but that stops, leaving a slight bourbon-y bitterness.
Comment: There is a pink tinge to the whisky, originating from the port casks. It feels a it thin on the palette: it is 46% abv, but feels less. 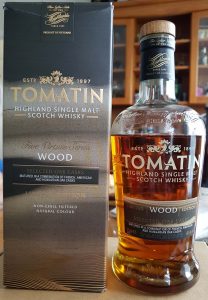 Matured in a combination of French, American and Hungarian casks.  46%, no age statement.

Nose: sawdust, leather, green pears, ground nutmeg, reduction brings smell of enamel paint
Palette: Sharp heat at first, drop off quickly.
Comment: It is fuller in the mouth than the 14yo, but for me it still falls short of completeness.

Next, a quick trip to the Ilse of Arran, below and to the left of Glasgow.

Between the mainland and the slightly suggestive Kintyre peninsula (made unnecessarily famous by Sir Paul McCartney).

Legend has it that there were many stills on Arran back a couple of hundred years.  But pressure for quantity over quality brought failure of distilling on the island and the old distilleries fell into disuse.

When the new Arran distillery was built and a three year old cask was opened, just under 10 years ago, it was the first legal dram of Arran whisky in 160 years!

Incidentally, in 1997, two casks were presented to Her Majesty, the Queen, one each for Princes William and Harry.  These casks – now around 22 years old – are still in the Arran warehouse.  I wonder if they need a hand with that?

Nose: Sweet, rum & raisin chocolate, and leather.
Palette: Fruity and spicy (Cinnamon and nutmeg), with a very slight oak sourness (bourbon barrel).
Comment: Looking through the dram at the sunlight, the liquid has a reddish tinge from the Marsala.

Back to Speyside.  This time to Glenfiddich distillery.

Glenfiddich is one of the most famous distilleries.  Their product is claimed to account for nearly 35% of all single malt sales in the world and sold in nearly 200 countries.

We’ve seen a lot of Glenfiddich over the years – from the superb accident that was Snow Phoenix, through the 18 and 21 year olds and the delicious Project XX to a few less than memorable drams.

But this Havana Rum one is well up in the top end of Glenfiddich output.

Nose: Raisins, rum, oak, Christmas cake, with brandy butter and honey.
Palette: Very big in the mouth, with oil on the lips.  The honey comes through, with boysenberries, honeydew watermelon, and an after-taste of delicious nashi pear.
Comment: A delightful, rich and full dram.  Well worth going back for seconds.  And thirds.

Away to the most eastern and one of the oldest operating distilleries, Glen Garioch.  I was given this tasting dram of an Adelphi bottling by long-time friend, Graeme, a fellow-traveller in whisky tastings, idiosyncratic sport, and birthdays.

Nose: Rich and sweet, fruit cake, spices (nutmeg & cinnamon), alcohol
Palette: There is a thickish full mouth with a slightly bitter note, and chilli.   A large amount of heat, tending to over-ride any other flavours.  A note of leather at the end.
Finish: The heat stays medium to long on the tongue.
Comment: Has this been in a sherry cask at some stage?  A good cask would help to explain the colour.

Now back west to Islay.

A few years ago we did an (unrecorded) vertical tasting of batches 1 to 3 of Bowmore Tempest.

Batch 2 was the best.

A bottle remained that needed opening.

Nose: Salt air, beach, smoked bacon.
Palette: Earth, smoke, sweet bacon, and a taste of green bananas at the end.  Sweet, overall.
Comment:  A typically Bowmore aroma, with peat smoke and beaches.  I have moved away from peated whiskies over the last few years, but tasting this one shows it to be way better than expected!  It’s actually very drinkable.

And now across to Cardrona Distilery in Otago, New Zealand.

I was lucky enough to review the first outputs from Cardrona – the “just Hatched” bourbon cask version, and its sherry cask sister – when they were released in December 2018.  I thought both expressions were superb, the sherry just coming out on top by a couple of points.

Kenny Vaugh, the distiller, was kind enough to offer my wife and I a tour of the distillery, an invitation I accepted with alacrity!

The tour was an extremely educational two hours and covered all aspects of Cardrona’s production – The Source Barrel Gin, “the reid” Single Malt Vodka, Rose Rabbit Elderflower liqueur, and the latest Just Hatched 3 yo Solera whisky. 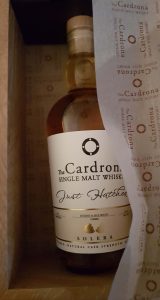 Nose: Wood, fruit, sacking, toffee, treacle, butterscotch, and alcohol burn (before reduction).
Palette: Leather and a sugar-sack, drying.  With reduction, it becomes mouth-filling and sweet, with a prevalent sherry finish.
Finish: Warming, long, tongue-numbing
Comment: Solera is the merging of two Bourbon cask to one Sherry cask.  It is good!  Pour it, taste it neat and then reduce with a little water.

Many thanks, Kenny.  Your hospitality and the fantastic tour were greatly appreciated.  And we will be back, to see what else comes out in the next few years!